We headed out bright and early to the Anhinga trail which was supposed to be a must see particularly for alligator viewing. When we arrived, we were surprised to see blue tarps covering all the vehicles. It turns out that the vultures will eat the rubber on windshield wipers and around windows so the park provides tarps and bungee cords to protect your vehicle. We grabbed a couple tarps and set to work covering any exposed rubber. The trail was concrete at first then wooden walkways that took us out into the swamp. We saw some of the same birds we had seen on our kayak trip with Monica and Irene and we were pleased we remembered enough to identify some of them. Towards the end of the trail we did finally spot a single alligator. He was relaxing in the sun and paid absolutely no attention to us. On the way out we saw a large turtle swimming underwater.

We spotted the trailhead for the Gumbo Limbo trail and decided to do that one too. That trail took us into a forested area very different than the swamp we had just been in.

We uncovered the cars and heading south to the Flamingo ranger station to plan our back country hike. Most of the back country sites in the Everglades are accessible only by water but there are some that are hike in. Greg had found a beach site he wanted to try. The ranger let us know that the trail is not well maintained and because of the large amount of rain lately, it could be up to knee deep in water in spots. We decided to do it anyway so the ranger gave us our pass and some warnings about mosquitos and raccoons.

We headed to the trailhead to start our hike. We loaded up our gear and put on plenty of bug spray and some bug repellent patches I found at REI that were supposed to work for 36 hours. The trail started out ok other than some slippery mud in places. Not long into the hike, things took a turn for the worse. The trail was indeed covered in water up to our ankles or higher. We tried walking off the trail but the plant growth was tall and hard to walk through. It was slow going to say the least and the mosquitos were biting. After about an hour, we checked our progress on the GPS and realized we had only gone 1 mile of the 6 mile trek. We decided to walk for another 30 minutes to see if the trail got any better then make a decision about whether to turn around. The trail in fact only got worse. Realizing how late it would be before we made our camp and with sunset only a couple hours away, we decided to make our way back. We took a different route back that was under tree cover and a bit drier. It had a nice view of the water, not sure if it was the Gulf of Mexico or the ocean.

We made it back to the trailhead and headed to the Flamingo Campground office to get a site for the night. They were closed for the day but instructions for late arrivals were posted. We found a site with room for both vehicles. A kindly volunteer came by and we told her what had happened. She said since we had paid for the backcountry permit we did not have to pay again for the campground and she told us if we hurried the solar showers would still be hot. After that long, wet, buggy hike, she did not have to tell us twice. We headed over there and the showers were fantastic.

We started a fire hoping it would help with the mosquitos as it usually did. No such luck. Those things were relentless and did not lessen shortly after dark as we were used to. I finally headed to the car to get some relief. Much to my dismay, the car was full of them. I could hear them buzzing all around me. The noise alone was enough to drive me insane let alone the itchy bites to add to the ones I had already accumulated throughout the day. I smashed as many as I could against the roof of the car but could not manage to get them all. I got out of the car ready to tell Francis we needed to find a different place to sleep. Oh course at 9pm at the southernmost point in the Everglades, there really was no other choice. He got in the car with me and together we killed all but one lone mosquito who kept occasionally buzzing all night. The car was miserably hot but needless to say we did not dare open a door or window! It was a long night. 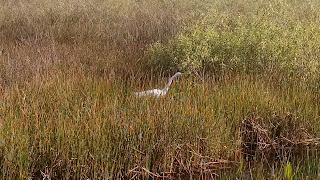 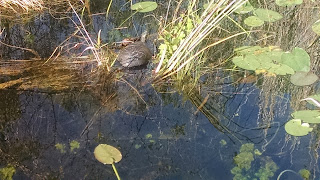 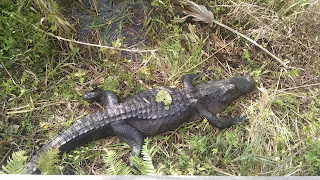 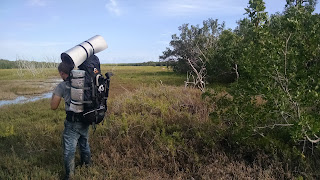 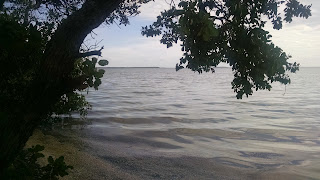