We headed back to Rio Grand Village mainly to use the wifi so Francis could check on his server. I took advantage of the opportunity to get a shower. This time I made sure to have $3 in quarters so I would have plenty of time. Unfortunately, the server was down again and he was beginning to believe it was a hack attempt. He needed to install some security measures but the free wifi would not allow him to log in as needed. So we went looking for phone signal so we could tether via his cell phone. We found a spot right at the beginning of Old Ore Road that had full signal and spent several hours there. It was a beautiful sunny spot and gave me time to catch up on emails, text family and friends and read a book on my kindle. Francis figures out it is in fact a severe hack attempt that is having negative consequences for his clients. It is frustrating for him to be dealing with this while on our trip but at least we are doing it in a beautiful place.
After working, we drove further down Old Ore Road to check out the campsites there. We found several that we could receive a phone signal unlike our current site in Pine Canyon. So we went to the ranger station and changed our second campsite from Rice Tank to Camp De Leon. Francis needed the signal to keep checking on his server and we didn’t want to spend all our time driving around looking for it. 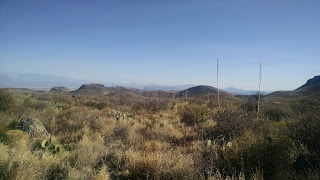