We woke up to what was by far the coldest morning of our trip. Instead of his usual cheerful ” Good morning,”   Greg greeted me with the words,” Where the hell have you brought us?” I could not really blame him. I had focused on location and price and failed to check the weather. I tried to point out the beautiful scenery but frankly I was not buying it myself at that point. Francis and I had talked about trying some winter camping but we quickly realized that probably was not for us.

Fortunately, we had plenty of wood to get a fire started quickly. We warmed up with some coffee around the fire and made our plans for the day.We were going to White Sands National Monument about 40 miles away. Greg and Beata headed to the waterfall for some pictures then we got on our way.

After a quick stop at Walmart for some groceries, we made it to White Sands in no time. We headed to the Visitor Center to get our permit for one of the primitive hike in sites on the dunes. We had read and heard about the incredible night sky views and were looking forward to viewing the full moon from the dunes.

We packed up our gear and headed to our site. The primitive campsites are only about a mile from the parking lot so it was an easy trek over the beautiful white dunes. We got our tents and our canopy set up quickly. We laid on the cool sand under the canopy. It was like a sunny day at the beach but without the water. We thought about staying there to take a nap but we needed more water and Greg and Beata wanted to cook some food back at their truck so we walked back to the parking lot. As we hiked, we noticed dark clouds forming in the sky that looked liked an approaching thunderstorm. We decided to get back to our campsite as quickly as we could so we would not be hiking in a storm. Francis and I loaded up on water at the Visitor Center and were preparing to head up when the wind picked up tremendously. It turned out it was a sandstorm not a thunderstorm. It was strong enough to damage the canopy attached to the side of Greg’s truck. Worried about our tents and canopy, we hurried toward our campsite. The quick hike seemed much longer in the middle of a sandstorm. The temperature had dropped significantly and the blowing sand stung any exposed skin. Fortunately the trail was well marked because it would have been very easy to get lost in the shifting sand. When we arrived at the site we were happy to see our tent was still there and had not been damaged. Our canopy did not fare quite so well and Greg’s tent poles had bent. We took shelter behind the dunes and waited out the storm. After about twenty minutes, the sun came back out and the wind died down. The storm was over.

We got into our tent to relax for a bit while Greg walked back to get Beata who had remained with the truck. We were about to do a little exploring when we realized the GoPro camera was not charged and we needed it for the night sky photos so we hiked back one more time. We made some dinner on the camp stove while the camera charged. We also chatted for a bit with Rob, our fellow camper from Guadalupe. It is fun to run into the same people on our travels. By this time, the sun was setting so we knew we had to get back to camp so we would not get lost in the dark.

We left the rain fly off the tent so we could have a clear view of the moon and stars all night. It was a little chilly but worth it. The full moon made the sand really bright. Francis got up several times during the night to take more pictures. 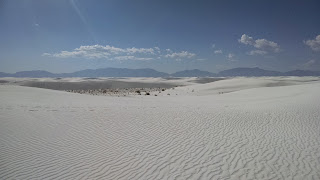 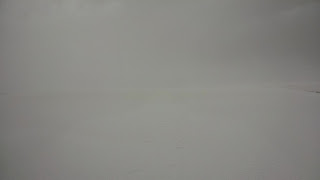 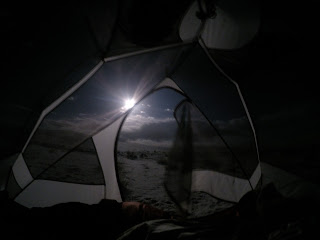 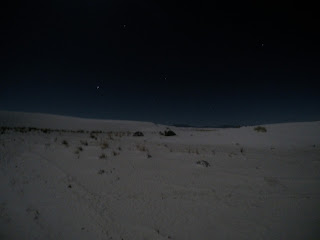