We woke to a beautiful warm morning. We took our time with breakfast and took advantage of the wifi we were surprised to find we had in such a remote, secluded location. On our way out, we stopped to talk with the ranger to get some advice on the best route to take to our next stop which was in Lincoln National Forest in New Mexico. It was on our way to White Sands and the national forests are great for nice free campsites.

We headed to the nearby Sitting Bull Falls State Park in New Mexico. It was a beautiful park with lots of space for picnicking. We hiked the short distance to the waterfall. You can view it from the top or walk down to the bottom of the falls. We took the trail to the bottom.

Back on the road, we stopped in Carlsbad for some supplies for the battery and ate dinner at an Asian buffet. We have found those give us the most food for our money and we knew we would get to our campsite too late to make dinner. In fact, it was getting late enough at this point that we briefly considered finding a hotel for the night. We decided to keep  driving but about an hour later we wondered if we had made a mistake because we still had a long way to go.

After about an hour and a half on a windy dirt road, we finally made it to Bluff Springs campground. As we drove in, we noticed something white along the sides of the road. At first we thought it was some kind of rock but then Francis said, “Is that snow?” We soon realized that was exactly what it was. When I found the campground on the internet I had failed to notice the high elevation so that was completely unexpected. It was hard to see much in the dark so we quickly chose a spot to park and got the truck set up figuring we would have time to explore in the morning. 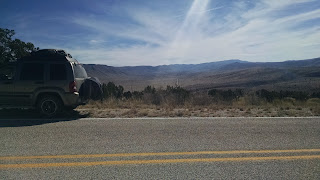 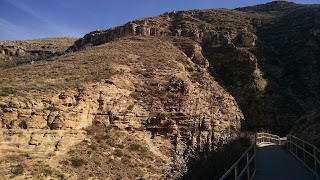